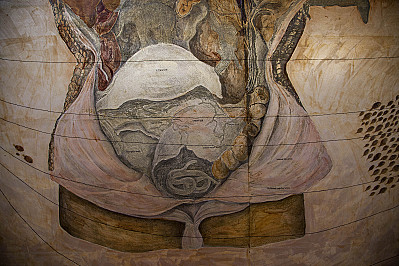 In this paper, published in the journal de arte no 75, Prof. Brenda Schmahmann provides a close analysis of three of the sub-sections of the exhibition ‘Parturient Prospects’ – The Interior, Birthing Tray and Parturition. In ‘Parturient Prospects’, the author reveals, Dixie situates her experiences against Western discourses, especially images from early modern Europe.

“Focusing on the ways in which visual representations construct woman as ‘other’, Dixie invokes reference to not only representations of birth and maternity but also religious, medical and geographical images. While the gendered underpinnings of these discourses are not always immediately transparent when they are kept discrete from one another, they become evident when they are invoked simultaneously, and Dixie’s works reveal that they are in fact mutually reinforcing agents and indeed often use related tropes. Dixie destabilises their authority not only by challenging their discreteness, however, but also, and even more crucially, by introducing motifs that interfere with their meanings.

These additions to, or substitutions for, the imagery in the discourses to which she refers are markers of both a female subjectivity and a postmodernist feminist voice that sees ‘otherness’ as a potential position of strength – a place from which to subvert and transgress gendered norms and understandings.” (2007: 25)